Posted on January 3, 2018 by Jennifer Ferreira

According to the ICO (2017) Mexico produced 3.6 million bags (60kg bags) of coffee in 2016 making it one of the world’s most significant coffee producers, and yet it’s rare (in the UK at least) to find much Mexican coffee being served outside of the country*. The reasons why, along with an exploration of the developing coffee culture in Mexico City are the focus of a recent issue of Drift magazine which provided inspiration for this post. I’ve read a few pieces over the last couple of years about how coffee culture is developing in Mexico, in particular a growth of specialty coffee in Mexico City. In April 2016 an article in Caffeine magazine introduced a few specialty coffee shops in Mexico City (Kitain, 2016), while both Perfect Daily Grind  (Plascencia, 2016; Yanez, 2016), and Sprudge (Yentch, 2017), have published articles about different specialty coffee shops and changing coffee culture in the Mexico.

The Drift issue includes articles which focus on the activities of particular coffee shops and individuals such as Café El Jarocho to Café Avellaneda, to discussions of coffee leaf rust, and changing trends in consumption in Mexico. It takes the reader on a journey through the people and places that are influencing the developing coffee culture in Mexico City, and the country more broadly. It prompted me to think a little bit more about the coffee culture in Mexico, explored in this post.

Unlike in many other coffee consuming countries coffee is not seen as the morning on-the-go staple, but an important part of sobremesa at lunch or dinner time (where customers take time to have a break after they dine to  socialise and relax), and consequently many coffee shops don’t open until late morning.

“As Mexico City’s coffee culture integrates immigrating coffee influences, the tradition around sobremesa still seems uniquely untouched. Invading second wave coffee giants, like Starbucks, have brought a fast paced high-volume coffee experience with it, a portfolio of Italian inspired drinks, such as cappuccinos and Americanos. But this hasn’t affected the native coffee culture: step into the dusty streets of Mexico City’s Roma neighborhood around 4pm and you’ll still find its residents leisurely sipping cortados, lingering and chatting after their afternoon meal.” p.36

This creates a very different coffee shop culture with places staying open later and a different daily consumer pattern. While specialty coffee culture may be a new and developing concept in the country, as highlighted in the Drift issue, drinking coffee more generally has a much longer history, and is an inherently social affair.

“In Mexico city, everyone drinks coffee – but few drink it the same way. Some are loyal to decades-old institutions such as El Jarocho. Others keep up with the hot new specialty shops on the block. Many drink Starbucks. The common thread that binds them is that coffee in Mexico is a social activity.” p.8.

The Drift issue puts the spotlight on a number of establishments from the institution of Café El Jarocho to the well-established Café Passmar, in Mercado Lazaro Cardenas in Mexico City. Its owner explained how the approach to coffee is beginning to change but that many people still don’t understand the wide variety of flavours on offer through their coffees. It’s one of many coffee shops in Mexico that only uses Mexican beans. 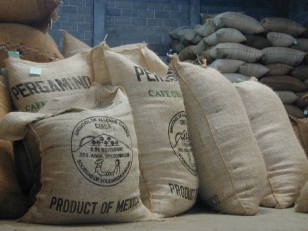 There are many producing regions in the country with very different climatic conditions  and elevations, which means  there is huge diversity in the coffee produced there. Much of country’s coffee growing is in the south, with Veracruz, Chiapas, and Oaxaca being well known producing regions. And collectively there are thought to be over 500,000 smallholder coffee farming families in the country – highlighting just how important the coffee industry is for both Mexico’s economy and people.

Whilst Mexico has a long history of coffee production (dating back to the 1700s), only recently is it developing a reputation for producing a range of specialty coffee, as explored in this video:

“Mexico City is transforming itself into one of the most important capitals of specialty coffee as, every day, its citizens learn the language of coffee”  (Yanez, 2016). The proximity of producers allows coffee roasters and coffee shop owners to have direct connections with farmers in order to obtain the highest quality coffees, and to foster relationships to ensure this quality remains. The Drift issue explores several different specialty coffee shops and roasters in Mexico city, highlighting their challenges from operating in a coffee producing country (and convincing consumers to pay a higher price for high quality coffee), to issues around coffee leaf rust.

While there is still a small number of specialty coffee shops in Mexico by international standards, numbers are growing. There are too many to name individually, and the articles I highlighted earlier in the blog post do a great job of providing an overview of the different coffee shops you can find there, in addition to those explored in-depth in Drift,  including: Café Avellaneda, Almanegra Café, Casa Cardinal, Buna, Centro Café, Chiquitito Café, El Ilusionista, Borola Café, Dosis Café, Hey! Brew Bar, to name just a few. Many of these specialty coffee shops either roast their own beans or serve largely only Mexican coffees. You can even go on  Specialty Coffee shop tours around neighbourhoods like Roma and Condesa  in Mexico City if you need help navigating the specialty coffee landscape.

Despite the recent boom in coffee shops, the specialty market remains niche in part due to preferences for instant coffee, demand from commodity coffee buyers, and costs involved in producing specialty coffee. Although there are lots of examples of small companies trying to change the way things work in Mexico – establishing projects to work with local producers to source their coffee directly. For example Café Los Serenos which sources from four growers in Puebla, and two growers in Oaxaca according to Drift magazine; or larger projects such as Café con Jiribilla which works with producers from Oaxaca, Guerrero and Veracruz.

For those in Mexico however, the opposite is the case with many coffee shops only using Mexican coffee beans, in part due to high import prices for other coffee (20% tax on green coffee, and 60% on roasted coffee). 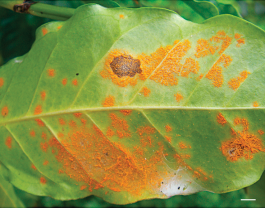 One of the greatest challenges to production of coffee in Mexico (as it is in many other countries) is coffee leaf rust, known as ‘la roya’. The rust is a disease caused by a fungus which bleaches the leaves which means they can’t photosynthesize effectively, stunting growth (Saliba, 2013). The disease has been present in the region for decades but it is only in recent years that it has got to such damaging levels, affecting previously unafflicted areas. While there are many initiatives being put in place to try and combat this, such as planting more resistant varieties, it takes many years for the new trees to grow – during which time the farmers cannot make the living they need. Even Starbucks has a Coffee Tree Initiative in Mexico (launched in 2014) to try and address the coffee leaf issue (Starbucks, 2016).

The future for coffee culture in Mexico

So thanks to Drift magazine I was inspired to learn a bit more about coffee culture in Mexico and how the coffee culture is changing, in part due a rise in specialty coffee. The discussions in the magazine, and in other pieces I’ve read highlight how there are increasing influences from Europe and American in terms of coffee preferences (drinking espresso, filter coffee, the design of coffee shops and so on), but that there’s still a long way to go before specialty coffee can become mainstream. Mexico has a rich coffee history, intertwined with politics, economic, social and environmental change in the country which the Drift issue touches upon. While there are challenges for the coffee industry in Mexico it is clearly an area of the world where the coffee culture, and the coffee growing industry, is experiencing change; one to watch closely in future years.

*After asking on Twitter I was introduced to a number of  UK based coffee roasters that have (or are about to have) some Mexican coffee: Carvetti Coffee  Roasters have a Sierra Azul Decaf; Rounton Coffee Roasters  have the Mexico Finca Muxbal; Volcano Coffee Works have their Finca Muxbal; and Sendero Coffee said they are likely to have some specialty Mexican coffee from May. If you know of any others, please do let me know.