Thinking about the ‘waves’ of coffee

Posted on February 18, 2018 by Jennifer Ferreira

A couple of weeks ago I was giving a lecture about the economics of the coffee industry as part of an international business module. At one point I ended up discussing the so-called ‘waves of coffee’ and how they relate to the way coffee has been viewed not only as an economic good at the international trade level but as an object of consumption in households and coffee shops. This focused predominantly on the three waves of coffee that are commonly referred to: first wave (commonplace consumption of coffee), second wave (increased awareness of roasting styles etc. associated with the proliferation of chain coffee shops) and third wave (focusing on the origins and craft of coffee). 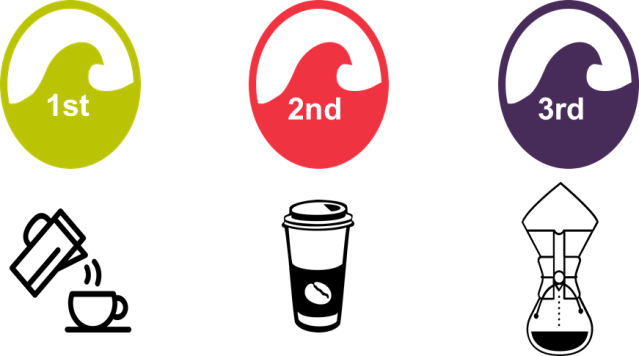 On various occasions I have seen reference to fourth (the science of coffee) and fifth waves (the business of coffee) too, though there seems to be even less consensus about latter two.

Shortly after the lecture I ended up listening to a Tamper Tantrum Podcast from December 2017 in which Trish Rothgeb (Wrecking Ball Coffee Roasters), who is credited with the creation of the term ‘third wave coffee’, explained where the idea for such a concept came from (see original article in Flamekeeper from 2002, here). 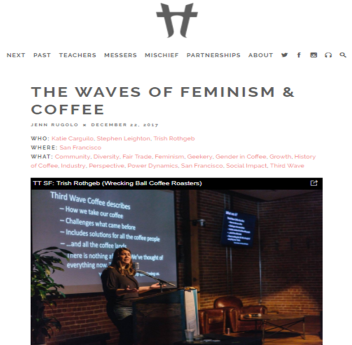 She begins the talk by congratulating the audience on ‘completing the third wave’, but also highlights how it has become a bit of confusing term as some people think they’re stilling going through the third wave, while others feel it has been done for years. I’ll return to this point a little later.

In the talk Trish explains how she experienced things in Norway in the late 90s and early 2000s in the coffee industry that she hadn’t seen before (working in the coffee industry in San Francisco) – little exquisite drinks, baristas who cared about the craft of coffee etc. She noted how people were caring about how they took their coffee, paying more attention to their coffee – there was a wave of change taking place. Her idea of ‘waves’ was inspired by a concept that had emerged about feminism in the US – with the third wave of feminism emerging in the 1990s.

In this podcast the first wave of coffee is noted as an era when it became common to sell coffee to people in supermarkets, the arrival of canned and instant coffee for the masses. This wave was about consumption – and about how it was realised that coffee could be consumed at all times of the day. Essentially, this set up the habits that many of us still have.

Then there is the third wave which Trish argues is about personal expression, about how people were engaging with coffee, it meant that coffee shops started to change what they looked like (less of the Central Perk look) and started placing more emphasis on the coffee, its origins and the way it was served (the popularity of the pour over for example). 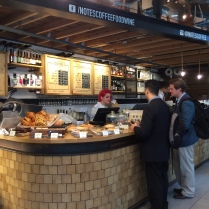 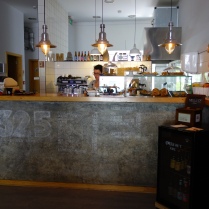 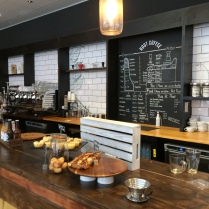 It’s interesting that she makes a comparison with the waves of feminism and in particular with the concept of intersectionality, a term coined by Kimberlé Crenshaw in 1989 which referred to particular injustices and social inequalities. Trish makes the argument that there are a number of ways in which the concept of intersectionality  (around gender, race, economic power, political unrest) should be important to consider in the coffee industry – and that many of the barriers in the industry can be broken down by considering them more carefully – thinking beyond just the coffee shop and consumption habits.

What is striking about this talk is about there is much deeper thinking behind the ‘waves of coffee’ than is often considered. It’s usually mentioned in commercial terms around the rise of commodity coffee, coffee shop chains and specialty coffee shops. It’s in these commercial discussions that I’ve seen reference to the fourth wave around the science of coffee, and the fifth wave, the business of coffee. These include no discussions of any of the concepts highlighted by Trish about inequalities in the coffee industry that need addressing – and the importance of addressing them for the sustainability of the industry. Perhaps this should be more of a focus than waves of coffee that are focusing on business models for expansion and the rise of boutique coffee shops.

The other issue with the discussion of ‘waves of coffee’ is around dates. There are now lots of references to these waves and when they took place. But in reality there are no definite dates, which can lead to some of the confusion I mentioned earlier. For some places the third wave may seem relatively new – in the UK context many smaller towns and cities are only in the last couple of years experiencing the emergence of specialty coffee shops that might define themselves as ‘third wave’. For others, with well-established coffee cultures, big cities in the US and UK for example, third wave is an old concept – and hence why in this podcast Trish (talking in San Francisco) congratulates the audience on having completed the ‘third wave’. In this sense, the terms are relative, depending on the place and its coffee history. The introduction of references to what’s beyond the third wave too adds to the confusion, and the use of the ‘waves’ in commercial terms has somewhat devalued some of the concepts that lay behind the term in the sense that Trish describes in this podcast. The issues around inequalities in the coffee industry highlighted earlier certainly have not yet been fully addressed, and so should future discussions of waves focus more around these issues – and less about the commercial opportunities a new wave might bring. For many people I’ve spoken to in the coffee industry, the term ‘third wave’ has been overused, and as such has lost its meaning to some extent, but if you listen to the podcast it shows how the thinking that inspired the discussion of waves was a more profound than just changes in the way we buy and drink coffee.

1 Response to Thinking about the ‘waves’ of coffee