More than a new latte experience: apple and cinnamon in Berlin

Posted on December 14, 2015 by Jennifer Ferreira

Like other European cities, Berlin is home to huge range of independent and café chains, some with familiar characteristics, and others with their own unique identity. When we arrived in Alexanderplatz it was raining, we were a bit hungry and definitely in need of caffeine. As in most cities there are a range of café chains, including Starbucks (often close to train stations to catch arriving tourists), but we tried to find somewhere a bit different. The first place we came to was Coffee Fellows, a chain which had its first store in Munich in 1999, and now has stores all over Germany as well as some in Poland and Austria. The cafes quickly became very poplar and spread across the country with 36 stores by 2010, and has received awards for its activities as a coffee shop (2009), and as a franchise business (2007). As well as a wide range of coffee, teas and other drinks, Coffee Fellows also has quite a wide fresh food range with a speciality in freshly prepared bagels. 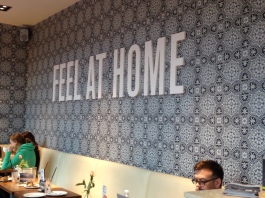 There were plenty of different types of seating arrangements, and it was clear that the atmosphere  was trying to encourage customers to ‘feel at home’, so much so that this had been adopted as their slogan. In search of breakfast the next morning we came across Balzac coffee, yet another café chain but with some interesting coffee flavour combinations I hadn’t seen in the UK before. Apple cinnamon latte became my staple morning drink, and I would also highly recommend the Pflaumenkuchen (Plum cake) for an afternoon snack. 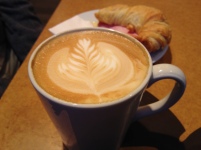 We also tried Einstein Kaffee by Checkpoint Charlie which has branches in Berlin (21) Frankfurt (1) as well as some in Belgium and Egypt. Being close to one of the busiest tourist spots in the city, it wasn’t surprising to see this place full of tourists.
It’s clear that each of these cafés are popular with a variety of people, much like I’ve observed in cafés across the continent; these places provide a space for people to not only get the food and drink they need, but also a social setting, a place to have work meetings and a bit of respite from the city streets. More frequently than in cafés in the UK, many of these cafes stayed open much later into the evening, and as with many city spaces, if you keep them open people will frequent them.

Aside from the chain cafés, there is a much broader coffee scene in Berlin as part of the third wave of coffee. Elizabeth Childers has written a concise history of the waves of coffee in Germany, from the first drip coffee patent in 1908 in Dresden. It appears compared to other European nations Germany had a much longer first wave of coffee based around drip brew coffees.

“In contrast to the standard wave timeline – with the Second wave mapped from the opening of Peet’s Coffee and Tea in Berkeley , California in 1966, to the Starbucks boom of the 90s – Germany First Wave lasted for so long that the Second Wave was delayed and stunted. In short, Germany didn’t start using espresso machines until the 1980s” Source: Slow Travel Berlin.

Elizabeth has also written a helpful blog post which highlights some other interesting places to try in Berlin – highlighting that for people who are less familiar with the range of coffee options available in these coffee havens there’s no need to be intimidated:

“don’t be intimidated by rumours of snobby baristas. They’re not – or at least not all of them. They are passionate and eager to educate and share. Ask questions or go to a cupping. It’s all part of connecting the people to the process, not just consumer to product”. Source: Slow Travel Berlin.

There are lots of interesting independent cafés to explore in Berlin, and just a few that are worthy of mention include: 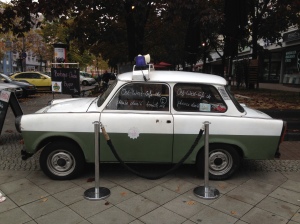 There are also a number of independent cafes with their own roasters:

There’s definitely plenty of interesting cafés to explore in Berlin from the traditional coffee houses to the more modern specialty coffee houses and everything in between. As well as those listed here, there are even more places for the coffee fan to try included in the Specialty Coffee Map of Berlin.

1 Response to More than a new latte experience: apple and cinnamon in Berlin